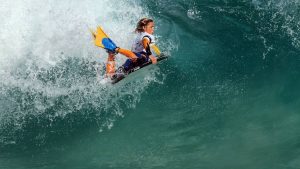 Bodyboarding is an excellent summer sport for people of all ages. As much as it is simpler to learn, compared to other extreme sports, it is also relatively inexpensive

to acquire the necessary equipment. Just recently, the sport has attracted a lot of potential bodyboarders, in a way that was never expected. The credit to this success goes to the numerous tours done by the International Bodyboarding Association.

The tour has been targeting regions like El Fronton in Gran Canaria, Chile’s Arica and the Banzai Pipeline. With such encouraging factors, it is easy to explain the reason behind the rising number of people involved in this sport. As much as bodyboarding has been done at a sports level, it is also possible to enjoy it as a leisure pursuit.

There are various bodyboarding techniques that professionals use, such as drop knee, where the rider places one knee on the board, with the other leg forward. Prone is where the rider surfs on his or her stomach.

In stand up, the rider will stand on the board, and execute a trick while surfing the waves. Bodyboarding is classed as a sport and has a championship that is held every season. The chief organiser of this championship is the International Bodyboarding Association.

As much as it is essential to check on the sea conditions, bodyboarding can be done in almost all situations, provided the waves are forming. Additionally, the options of which wave to ride are endless, any surge can work out well with a professional boarder. Many people believe that this sport links us to the sea. As much as a bodyboarder is elevated above the waves, they are still conjoined to the wave, hence being a part of it. Unlike other sports, bodyboarding does not involve winning a large sum of cash; thus, most champions do it for the love of the ocean.