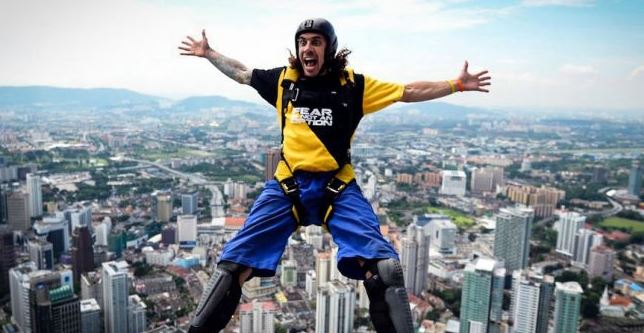 Extreme sports are primarily focused on the thrill and excitement of what you are attempting. For most people, it’s about the fun, while others are merely testing their limits to see what’s possible. Regardless of the reason, extreme sports come equipped with a wow factor that cannot be matched by a regular sport. With that in mind, let’s take a look at some of the most extreme sports in the world.

Jump inside the middle of a giant inflated ball and roll down a steep hill. Most people that are interested in zorbing are becoming more and more creative, transforming it into a massive game of ten-pin bowling and simply re-enacting the Indiana Jones scene with the runaway boulder.

Some wouldn’t regard scuba diving as an extreme sport. However, if you are 100 metres below the sea and the only thing that’s keeping you alive is an oxygen tank on your back, not including the underwater creatures that are all around you, it can be quite intense.

It’s not the most extreme sport in the world. However, those that show an interest in this sport can get very technical when it comes to the tricks, kicks, flips, power stilts, and all types of acrobatic moves that they display.

So, this is what you need to do. Get a giant airbag and position it in the middle of a vast lake. Then, place a person on one end of the airbag while someone else jumps from the other end. The heavier and higher the jumper is, the bigger and better the lift-off will be.

Also referred to as off-road boarding and dirt boarding, mountain boards can tackle any terrain you desire and are often used to compete in downhill races or to perform various tricks. This is essentially a cross between snowboarding and skateboarding.

Water skiing and wakeboarding are trendy sports that are usually performed as a recreational activity. However, some people take this sport to an entirely different level, adding incredible jumping skills and manoeuvres behind the boat to get the most out of the sport.

This is also referred to as kiteboarding or kitesurfing. All you need is wind. The more you have, the better. Then, get yourself a harness, a huge kite, and a board, and you’ll be well on your way to experience the thrill of being dragged by the wind. That’s if you can handle it. Whether you do it on snow, sand, or water, it remains a thrill.

Most people believe that parasailing is simply a relaxing activity done on a beach during your holiday. However, when you are pulled by a rope while being hundreds of feet in the air, there’s no denying that the adrenaline rush alone will have you believe that this is indeed an extreme sport.